This place sells tofu (두부) and cigarettes (담배), as well as chicken.

In Korean, chicken is called 닭. The word 닭 refers to both the animal itself and the food. Nevertheless, when it comes to fried chicken, most places use the English word 치킨, which is what I could call Konglish (Koreanized English). A lot of fast food, snack food, or unhealthy food does not get honored with its own Korean word, but rather just gets the English pronunciation converted into the Korean language.

I’ll have to dig for a picture of some chicken in the side-streets of Korean towns. I can definitely say that the urban hen movement is alive and well in Korea, as I have seen the occasional chicken loose in the alley near my old room in Seoul’s Donam-dong neighborhood.

닭갈비 (dak-kal-bi) is a specialty of the city of 춘천(Chuncheon) in the province of Gangwon-do. There, entire streets are lined with 닭갈비 restaurants competing with one another.

Chuncheon is famous for its 닭갈비.

A few years ago 불닭 (불means fire), or fire chicken, restaurants became very popular, despite the stomach problems it caused.

닭발 means chicken feet. This is also popular, as is 족발 (pig feet).

발 means feet. Hmmm! Delicious, but not much meat.

A man walks under the faded sign of a 통닭 restaurant in Jeju.

Not sure if this place is open anymore.

Getting some air outside a Chicken 홒.

This 치킨 place offers both 배달 (delivery) and 포장 (take-out).

"We have a special technique of frying chicken!" 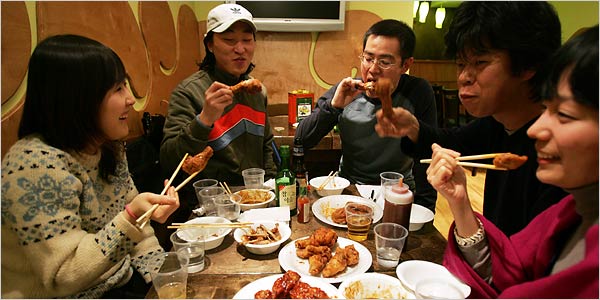 They're drinking soju not beer with their chicken!

A lot of chicken places have outdoor patios. How I miss those hot summer nights in Seoul with chicken and beer.

The patio of a 치킨 restaurant.

Not many Western chicken restaurants have chicken clipart in their sign.

At first, I wondered if this 치킨 restaurant deliberately named itself after Sing Sing Prison in New York State, but then found out that 싱싱 means fresh in Korean (the more common word for fresh is 생).

Sing Sing is the name of famous prison.